A Carnivorous Cat and Crocodile Confrontation is a Spectacular Showdown in the Wild!!! 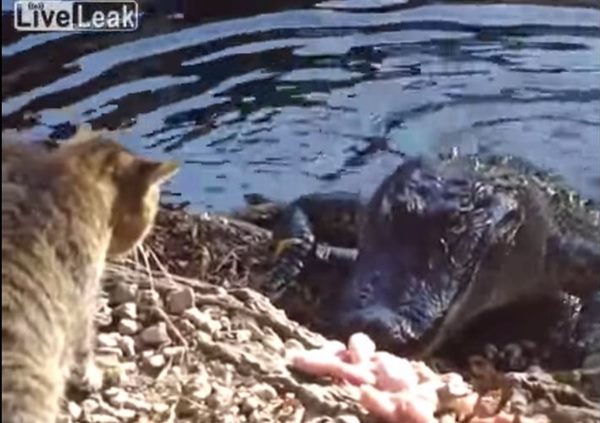 Here is an unlikely showdown and confrontation between a cat and a crocodile over some food. This seems to a surprizing battle as the cat is so much smaller than the crocodile. Nonetheless, the cat appears to be challenge the crocodile over the food!

The crocodile seems to be more interested in the food than in the cat who is directly in front of the large predator.

The crocodile starts to devour the food as the cat watches on.

The hungry cat approaches even closer to the food and the crocodile who appears to finally notice the feline nearby! Now, the two animals engage in a stare-down over the remaining food on the shore. The menacing crocodile now seems interested in eating the cat! Surprizingly, the cat attacks the crocodile and swipes at the large reptile with its paw! The crocodile appears to be shocked at the smaller animal’s aggression. The crocodile retires back into the water leaving the remaining food on the shore. Please watch this exciting exchange between these animals!

The cat appears to have won this confrontation!

A cat with a rifle is discovered → The police are dispatched and strict precaution with verbal endings … Why is that !?