A Real Human Drama of a Mother who lost a daughter face-to-face with the Criminal in Court!!! 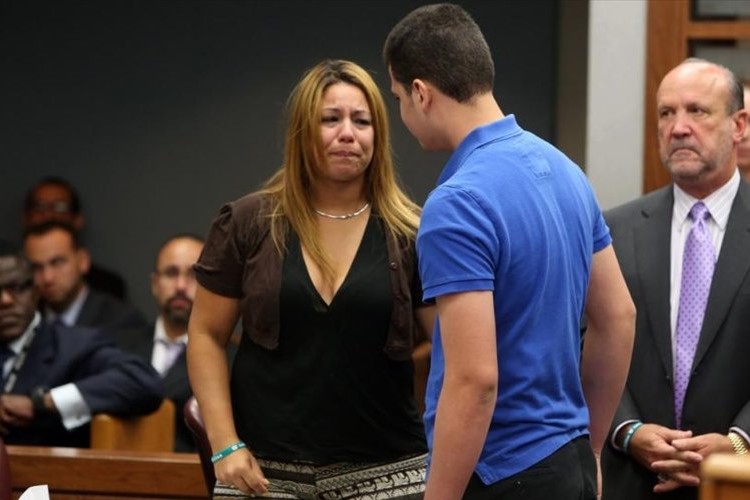 source: www.nydailynews.com
A Man convicted of a daughter’s death and the Mother of the victim meet face-to-face in court is a real human drama that became a huge viral hit online with millions of viewers all over the world!

In November 2012, while riding in a school bus, the young man pictured below was carrying a gun illegally. At some point, the gun went off accidentally and shot an innocent young girl who was also riding on the bus. She later died of the wound in hospital. Both were teenagers at the time of this tragedy.

Two years After the Incident, face-to-face in court Two years later, the mother of the victim and the convicted young man faced each other in court. In a dramatic encounter, the mother approached the young man and embraced him with a hug with the message that hatred and revenge would not bring her daughter back to life and that it is better to forgive than to forget. In addition, the mother request that the sentence of the young man be reduced as a gesture of forgiveness. The court granted this request and the young man could attempt to return to a normal life rather than many years in prison.

On the contrary, the court judge said the following:

In 20 years, we’ve seen the tragedies of a variety of human beings in this court. Still, I could never imagine that the victim’s mother would hug the murderer of her daughter.

In addition, the mother went on to say.

We want to change things in order to save the other children. These two teenagers were friends and this accident should be a worst-case scenario.

Howe spent one additional year in juvenile rehabilitation facility, and then visited several schools with the mother to conduct lectures about the dangers of guns.

What do you think?