See the Ambitious Plans to Build a Skyscraper that is Hanging from an Asteroid in Space!!! 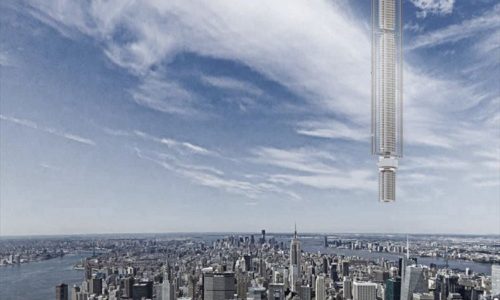 Here are some ambitious and amazing design plans of a “skyscraper suspended in the sky and hanging from asteroid in outer space” that has quickly become a big topic of discussion with online viewers from all over the world recently!

Is this design even possible?

This plan for such a building was recently announced by an architectural design firm based in the New York City and is called the “Analema Tower” which features the a skyscraper suspended by a cable from an asteroid located 50,000 kilometres above the surface of the earth. It would be composed of lightweight and durable carbon fiber and aluminum and other materials would be needed to construction of the cables used to connect the building with the asteroid!

In addition, electric power would be supplied by solar panels installed in outer space as well as using clouds and rain to circulate with in the structure! Lastly, a futuristic electromagnetic elevator is also conceived to connect the building with earth’s surface!

Here is the designer explaining the reasons for creating this structure:

Since humanity left the cave, our buildings were higher and evolved lighter. Someday I believe that the building will be released from the ground and the day will come when humanity will be free from floods, earthquakes, tsunamis and other damage.

The human desire for progress continues with this amazing building design that defies convention!