A Doraemon Staged Performance Produces a Surprize Flying Head off One of the Characters!!! 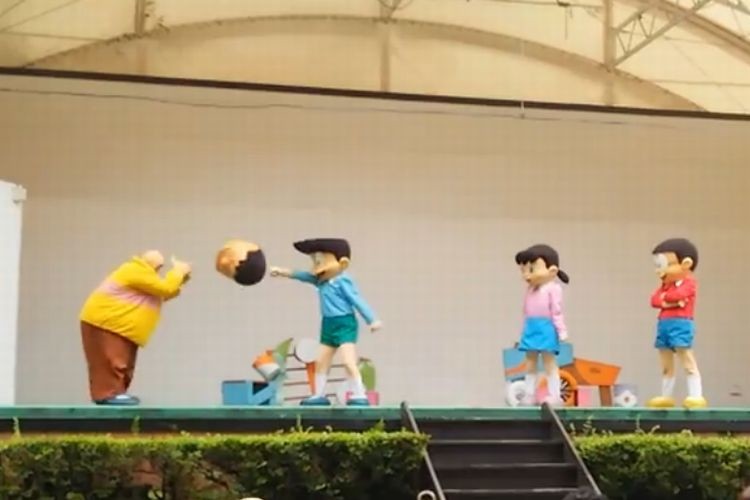 A video of a staged Doraemon performance produced a surprize moment in the show of a “flying head off one of the characters actors on stage in front of the audience!”would fly over from the neck of Gian that, rainy day happening video will introduce since it has become a hot topic!

In the opening of the performance. the character “Gian” (seen in yellow) is marching around the stage triumphantly. The actors on stage have no way of knowing what is about to occur. This is a scene of Doraemon’s birthday where everyone have brought gifts and about to enjoy a surprize birthday for the robot cat named Doraemon.

When Doraemon enters onstage, the other characters try to keep his surprize party a secret. They attempt to explain their bizarre behavior with a number of creative excuses with varying degrees of success. After Doraemon leaves the stage, the other characters have a quarrel about their errant behavior and one of the characters (who is named Gian) offers to apologize (by bowing) to his companions. What happens next is totally unscripted. The actor is able to catch the head in his hands before it hits the stage but the damage has already been done. Then, the “Gian” head is tossed onto the stage and the other characters look quite surprized at this situation.

The flying head creates a surreal moment even for a stage play of animated characters. Don’t you think? The actors seem stunned by this event and almost remain frozen on stage with little or no dialogue. It is amazing to see! The “Gian” head had fallen down into the area of the audience and finally the actor attempts to retrieve the head. It is a slightly complicated action to do with an audience full of children and parents.

Please watch the video below to see this unusual incident within the context of the entire performance.

**This scene will start from around the 4:00 minute mark of the following video.**